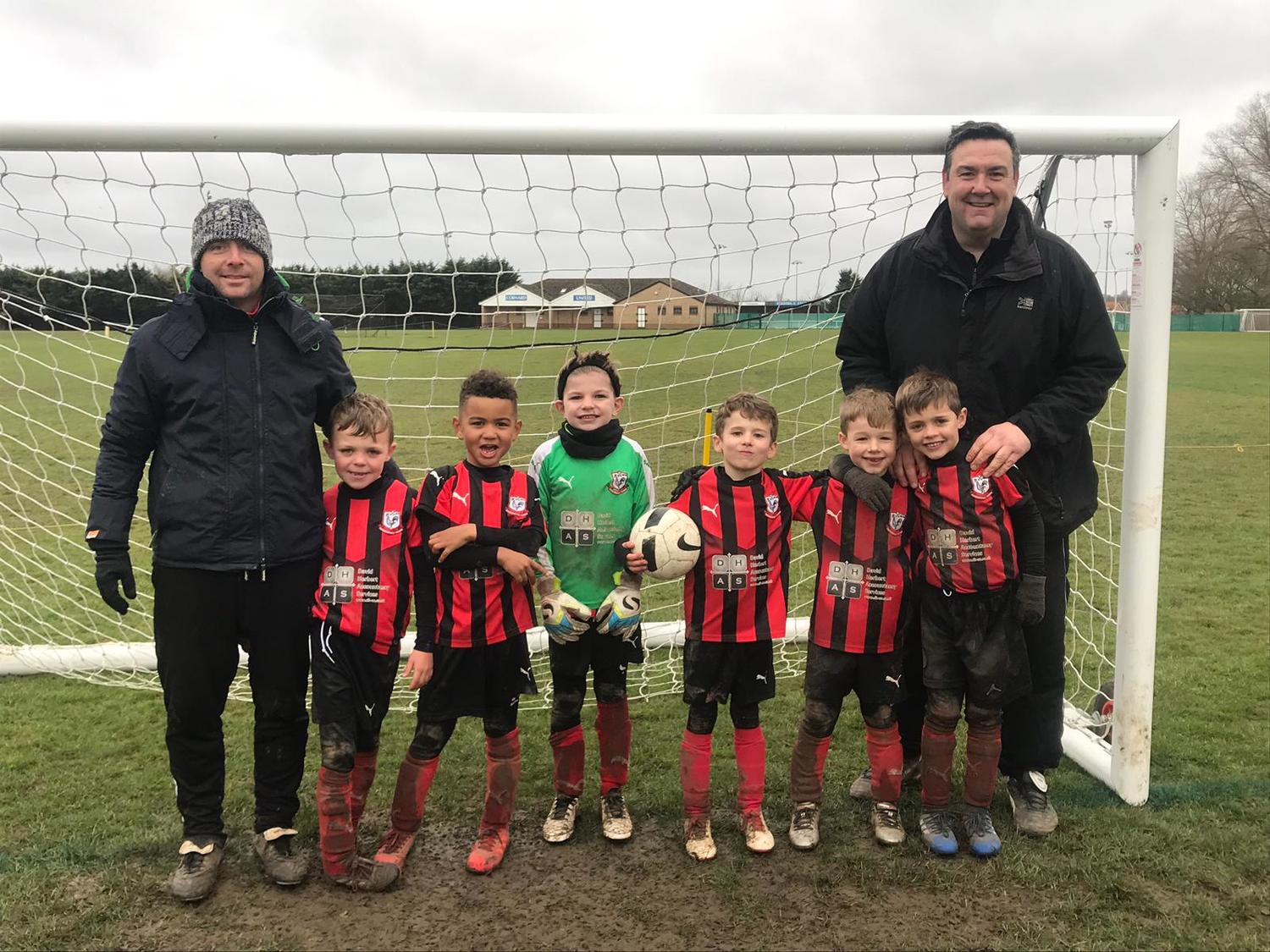 Coggeshall Town U7 Cannons were invited to the latest FA Event at Cornard Dynamo’s ground near Sudbury. The tournament consisted of 9 teams, all part of the Colchester and District league
With just 6 players due to illness (2 of which playing up a year), and poor weather conditions the team were determined to enjoy the event and try their best.
The first two matches were against tough opposition so the team had to dig in deep and with some superb defending, their customary hard work and great goalkeeping from Parker both games ended in a draw.

The third of the group games finished with a resounding win, with a first ever hatrick for young Tendengu as well as a screamer of a goal from Wilmer. This result meant the team finished 2nd in their group and through to the Semi Final. The result had given the boys renewed confidence that was clearly visible and the team were left buzzing and up for the challenge ahead.
Due to their positioning it meant they would take on the winner of the other group so they knew a tough game awaited them. The two teams had previously met earlier in the season with only a single goal separating them, in Coggeshall Towns favour. Knowing the other team had some great players and with their renewed confidence the Cannons raring to go.
The game was as expected, challenging, but through some fantastic play turning defense into attack Wilmer put Barrow through on goal, a desperate lunge from their defender resulted in an own goal brought about by Barrow’s great run. With one minute left to go our defence went to sleep and gifted the opposition a goal, Dave Herbert the team manager asked the boys for one big effort and they duly delivered, a fantastic ball from the back by Lesiak put Barrow through once more who finished with aplomb. The referee blew the final whistle. The team had done it they were through to their first ever final!

In the final Coggeshall were to be play against a local rival. With the wind still blowing and pitch muddy, the boys they had already given their all, the boys knew this was their last game, could they do it one more time?
The team readied themselves for one more massive effort. With the whistle to start the game Coggeshall Town were off to a bright start. Tendengu was having the tournament of his life, he weaved through their defense and slotted home from close range, with his fourth goal of the day!
The game then became more even with chances at either end. But then a corner was present to Coggeshall Town on the right hand side, as the corner came across to the back post Wilmer timed his attacking run perfectly and smashed home a volley. The opposition continued to apply pressure with some fantastic play winning a free kick centrally just outside of the Coggeshall box. The resulting free kick went like a rocket up and over our wall and into the net. Two minutes left, could the team hang on and seal our a first ever tournament win? With the manager anxiously checking his watch, counting down the seconds, Lesiak , Rees and the whole team defended bravely.
Then it came, the referee blew the final whistle, they had done it, they were ‘TOURNAMENT WINNERS’. Both the boys and parents screamed with delight, as the players ran over to their parents, soaking wet, covered in mud, but very very happy!

Hats off to the opposition they never gave up and continued to hassle and pressure the team right to the final whistle.
The organisers of the event presented the Coggeshall Town team with certificates of achievement to a well deserved round of applause from the parents of both teams.
A big WELL DONE to Coggeshall Town U7 Cannons, from everyone involved at the club, a great achievement, you have done us all proud the magnificent 7’s.